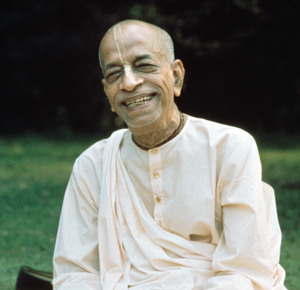 Memories associated with the photo.

Gargamuni: This painting was produced by the first senior citizen of ISKCON living in the temple in Los Angeles in 1969. Her name is Devahuti Devi. This jhulan swing painting was used on the cover of the first printing of The Nectar of Devotion published and printed by Srila Prabhupada's own ISKCON Press in Boston in 1970. This book had a remarkable effect on devotees. From being a cult-type religion, we now accepted ourselves of actually learning the science of love of God who is a person, which no other religion of the world teaches. I really studied this book. Srila Prabhupada called this book the 'Kingdom of Bhakti'.

An ideal spot to take photographs

Visakha: In early July, tens of thousands attended San Francisco's Rath-yatra parade and festival. Prabhupada addressed them in a sunny meadow in Golden Gate Park, saying that the Bhagavad-gita was the basis of the Krishna consciousness movement. And the Bhagavad-gita reminds us that we are integral parts of God, who is the chief of all living beings. It's God who maintains all living beings. It's He who is the predominator. We are maintained and predominated.

My heart gladdened to hear Prabhupada explain these basic points. He spoke with conviction, and what he said was based on the authority of scriptures and sages throughout the ages. It was also clear and logical and epically relevant. "Why didn't more people 'get' it?" I thought, completely ignoring the grim fact that only weeks before, for some unknown reason, I'd been missing it myself.

After his talk I started to climb the stage steps to photograph the event when a devotee blocked me, saying, "Women are not allowed on the stage." I explained that I was authorized by Prabhupada to take photos, but this man was adamant. Usually, I devised ways to circumvent such obstacles, but this time I found myself disheartened - after all, the fundamental Krishna conscious understanding was that we're not these male or female bodies but spiritual beings, and besides, this person was interfering with my service, and anyway, women as well as men should be on the stage, and so on.

Suddenly weary, I meandered to the middle of the field behind the audience and plopped down on an empty chair, thinking, "If I could think of something better to do than Krishna consciousness, I'd surely do it." I wondered what my life would have looked like if Prabhupada hadn't entered it. Through a lens of oversimplification, I suddenly saw myself caught in a web of competition, clambering for photographic assignments, climbing a ladder of prestige while trying to ignore a pervasive stench of phoniness and meaninglessness. Probably drinking more than wise. Hiding beneath a layer of competence and conviviality. Certainly confused. In summary, miserable.

After a short time the kirtan intensified. I looked up to see Prabhupada getting off his seat. He took a bunch of pink roses and threw them one by one into the huge crowd. Finally, he threw what was left of the bunch and, raising his arms, began to dance. I stood on the chair I'd been sitting on and realized I was in an ideal spot to take photographs: in the lower part of the frame were the audience's upraised hands - black and white, men's and women's, young and old - and in the center was an ecstatic Prabhupada surrounded by his blissful students. Behind him stood the Deities.

The experience left me humbled: how easily my consciousness had drooped. How much I needed help with my service, and how ignorant I was of the ways in which that help came. Clearly, awareness of Krishna, which was natural for Prabhupada, was superficial for me. Yet, also clearly, someone was trying to help me. I bowed my head in thanks.

The Surabhi Store was a service created and run by Vamanjana Prabhu and his wife Navina Dasi. It was a total success, and devotees were able to purchase bhoga. I use to make potato salad and carob cake. Srila Prabhupada visited Surabhi Store; we can see Srila Prabhupada's servant Srutakirti with him.

Gargamuni: In 1970, I purchased the above Los Angeles temple and constructed Srila Prabhupada's 4 rooms which were before closets - everyone, all devotees were engaged for the simple pleasure of Srila Prabhupada - the representative of the Supreme Lord Krishna. Later Srila Prabhupada comments - if he is given a big task to do, Gargamuni has got determination and he always comes out successful in this matter of raising money and doing some big work with it, just like when he purchased our Los Angeles temple.

HE was the spiritual master I was looking for

Visnurata Dasa: It was summer of 1972, at Montreal, it then remained to be seen if the devotees were indeed living up to Krishna's and Prabhupada's teachings. So we went to the temple. To get there, one had to climb three flights of stairs in complete darkness before reaching a large door opening on a room bathed in vivid hues of yellow and pink, and filled with aromas of sweet incense and exotic cooking, not to mention the sound of mystical recorded bhajanas. It was definitely like ascending from the lowest regions of the universe all the way up to Vaikuntha.

My eye was immediately caught by a large picture of Srila Prabhupada leaning back with his hand poised on his cane "MADE IN USSR." I spontaneously connected the face with the voice singing on tape, and felt that I actually knew that person from a distant past.

After confirming that he was also the author of the book we had read from, it didn't take much for me to understand that I had come to the right place, and that HE was the spiritual master I was looking for. I then knew my prayers had been heard, and that life was again full of promises.

Prabhupada: I challenged him, "You are Buddhist." "Yes." "You are eating meat?" "Yes." "What is this?" [laughs] That was my first talking with him.

Sudama: They were wanting to talk business for a long time. You were simply preaching to them.

Prabhupada: Just like Caitanya Mahaprabhu went to the Kazi. His first question was that, "What kind of religion you are following, you are killing your father and mother?" This was His beginning of the talk. "What kind of religion it is?" "How is that? I am killing my father, mother?" "Yes, cow is your mother and bull is your father. You are killing them. The bull is giving you grains by working in the field, and the mother is giving you milk, and you are killing them." [Morning Walk February 4, 1976, Mayapur]

The Directors had absolute respect for Srila Prabhupada as a genuine saintly person and gave him huge credit facility simply based on his word of paying later - a policy they never gave to any other customer.

Riddha Dasa: On October 14th, 1975, Prabhupada arrived at Jan Smuts Airport, Johannesburg, at midday. He flew from Durban on a domestic flight with South African Airways, accompanied by Pushta Krishna Swami on one side and Harikesa on the other.

A proud Mr Rasikbhai Parekh and friend greeted Prabhupada with a beautiful garland and walked by his side. Ramanujacarya led a chanting party that included Rocani, Bhaktin Gail and Bhakta Mike, while I scattered flower petals before Srila Prabhupada's path.

As Srila Prabhupada was walking through the terminal, two young hippies appeared and prostrated themselves on the floor before His Divine Grace. Although I had no idea who they were, they evidently acted in all humility. Most likely they had read some of Prabhupada's books and knew us from our former ISKCON centre in Cape Town years before.

Reference: Mission in the service of His Divine Grace - Riddha Dasa Adhikari

Riddha Dasa: October 10th, 1975, Durban. It was on this day that Srila Prabhupada received Dr. S.P. Olivier, the rector of the University of Durban-Westville, privately in his room. Prabhupada had deep and meaningful discussions with the rector and came to like him very much. He said that he was a good and a very open man. He stressed further that he wanted to bring his disciple, Svarupa Damodara Dasa, a Ph.D., to take up a post at the University of Durban-Westville.

Reference: Mission in the service of His Divine Grace - Riddha Dasa Adhikari

A gift to Swamiji

Satyaraja: While still at 26 Second Avenue (the devotees would soon relocate a few blocks north), Brahmananda gave a gift to Swamiji - a small globe. "I got these little markers, too," says Brahmananda, "which were specifically meant to mark off sections on the globe. I got them in the color blue - for Krishna, of course - and I put a marker on every city in which we had a center. Swami loved it, and he kept it on his desk. At the time, we had about fifteen centers, and we watched it grow: London, Montreal, Germany, Boston, Santa Fe, L.A., Buffalo, Washington, Philadelphia..." Inspired, Swamiji and his early disciples were delighted as his movement expanded, slowly but surely.

This was prior to Swamiji's initial trip to India in 1967. Having returned, with improved health, he began extensive traveling to spread Lord Chaitanya's teachings around the world at a more rapid pace - training disciples, opening temples, farm communities, restaurants, and educational institutions. And, once the BBT was fully established, he continually produced volumes of translations and commentary, serving to inform his ever-increasing number of disciples and all who were interested. His movement seemed unstoppable, and his globe was overrun with markers.