Prabhupada rose early, despite having kept late hours the night before, and after the morning class he was back in the kitchen. Now, half a dozen disciples sat in his front room making dough for puris and samosas. He had shown them how to make the dough, and Umapati had kneaded for a while by pounding the soft dough with his fists. But Brahmananda was better at it, socking the weight of his wrestler's body onto the large lump of dough.

As Swamiji entered the room to examine the quality of the puris, his disciples looked up at him respectfully. They were always serious when he was present. He picked up a puri and examined it. "It is not to the standard," he said, "but it will have to do." Then, amid crumpled rejects and oddly shaped pieces of dough, he squatted down beside his helpers, who were trying as best they could, though making a mess. He took a small ball of dough, pressed it flat with his fingers, and then deftly rolled it out until it curled around the wooden pin and then fell off-a perfectly round puri. He held it up, displaying a translucent, thin (but not too thin) patty of dough. "Make them like this," he said. "But hurry."

On discovering that the dough was too stiff, Swamiji added a little ghee and then a little milk and kneaded the dough to a softer texture. "Everything should be just right," he said, and his disciples took to their menial tasks with concentrated earnestness. Who among them had ever heard of these things before-puris and samosas? It was all new, and the challenge something very important; it was a part of devotional service.

Swamiji did much of the cooking as he simultaneously supervised his helpers. He was always near, walking barefoot back to the kitchen, then to the front room, then to his own room in the rear. And even when he went to his back room, his disciples could see him through the window in the wall.

Swamiji saw each of the nearly one dozen dishes through its final stages, and his disciples carried them into the front room in pots, one by one, and placed them before the picture of Lord Caitanya. There was halava, dal, two sabjis, fancy rice, puris, samosas, sweet rice, apple chutney, and gulabjamuns, or sweetballs-ISKCON bullets.

Swamiji and a couple of his cooks offered all the preparations to Lord Caitanya, reciting the parampara prayer. 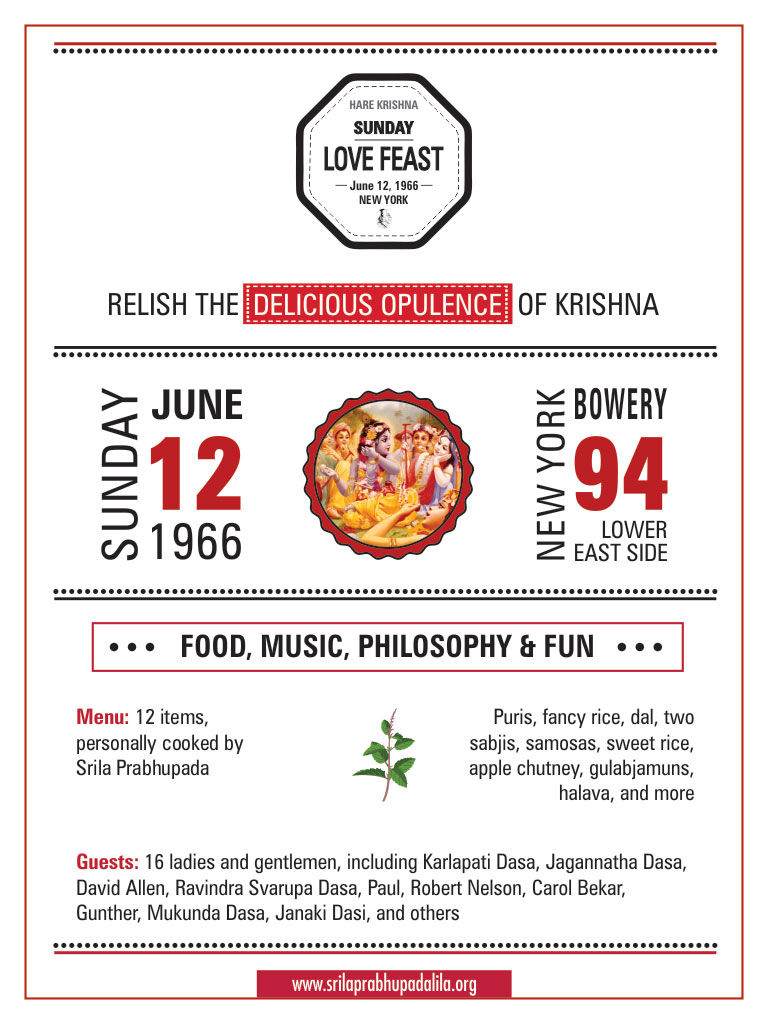 The first few Love Feasts were not very well attended, but the devotees were so enthusiastic about the feast prasadam that they showed no disappointment over the scarcity of guests. They were prepared to eat everything.

Eating the feast was an intense experience. We were supposed to be subduing our senses all week, following strict regulations, controlling the tongue. And the feast was a kind of reward. Swamiji and Krsna were giving us a taste of full spiritual ecstasy, even though we were still beginners and still in the material world. 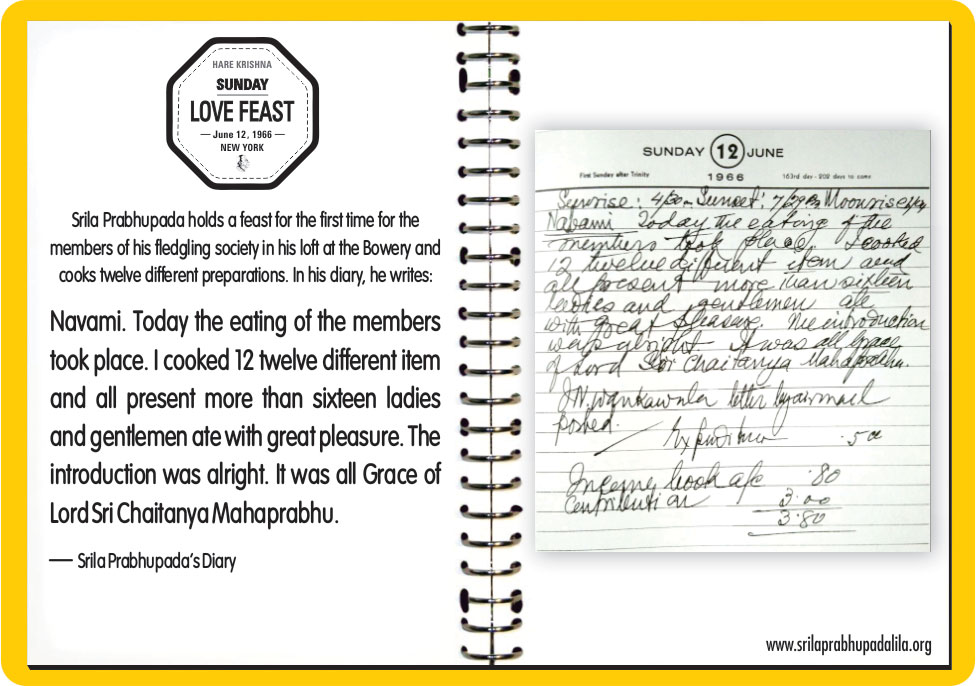 Gradually, attendance picked up. The feasts were free, and they were reputed to be delicious. Mostly local hippies came, but occasionally a higher class of experimenting New Yorkers or even the parents of one of the devotees would come. When the small temple was filled, guests would sit in the courtyard. They would take their prasadam-laden paper plates and their wooden spoons into the backyard garden and sit beneath the fire escape or at the picnic table or anywhere. And after eating, they would go back into the storefront for more. Devotees were stationed behind the pots of prasadam, and the guests would come by for seconds. The other tenants were not very happy about seeing the courtyard full of festive guests, and the devotees tried to pacify them by bringing them plates of prasadam. Although Swamiji would not go down to the temple, he would take a plate in his room and hear with pleasure about the success of his new program.

Next: The Effect of Prasadam